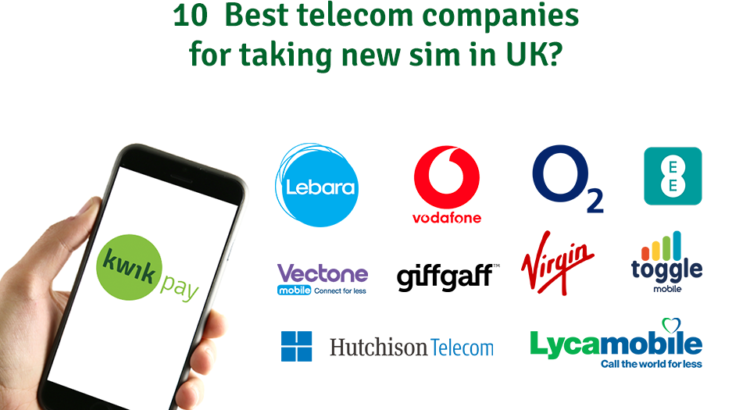 10 Best telecom companies for taking new sim in the UK

One of the biggest challenges in the world that we live in is the various options we have available for pretty much everything. Take getting a new SIM for example. One would typically only need a SIM which is economical and meets your needs.
However, there are so many things to be considered now, i.e. the quality of the signal in the area that you frequent the most (home, work, gym), the speed of their Data connection, the plans they offer and whether they fit your budget, the list goes on.
The following is a list of companies you can consider when getting a new SIM in U.K. and how you can get a mobile top up done for each once you decide which one suits you best.

As the UK’s largest mobile network provider, EE or Everything Everywhere boasts of being the largest operator of 4G services across Europe. Its headquarters is in Hatfield, England. EE was the first to provide 4G services in the UK by repurposing their 2G spectrum until the government auctioned the official 4G spectrum.
How to do EE top up?

Lebara was established in 2001. It wasn’t until 2009 when they launched their services in the UK using Vodafone’s infrastructure. Lebara provides pay-as-you-go mobile SIM cards at economical prices. They target and cater especially to the international communities and workers who are from other countries.
How to do Lebara top up?

Although the parent company was founded in 2002, 3 or Three was not launched in the UK until March 3rd, 2003, i.e. 03-03-03. You have the option of choosing between Pay Monthly & Pay As You Go. This network is known for its Data coverage across the UK.

Founded as Cellnet back in 1985, O2 as we know it was launched in 2002. This company was the first telecommunications provider to commit and take the steps to reduce their carbon footprint earning them the Carbon Trust Standard. O2 also allows you to pay separately for airtime usage and your handset.
How to do O2 top up?

A well-known brand across the world, Vodafone one of the three biggest telecom providers in the U.K. They offer every service like mobile phone deals, pay as you go SIM cards, as well as broadband services.
How to do Vodafone top up?

Virgin Mobile was launched by Virgin media in 1999 as a mobile virtual network provider (MVNP) which was the first of its kind. It means that the company did not maintain their network but instead used the existing infrastructure of EE (Everything Everywhere).
How to do Virgin top up?

Another MVNP with great deals. Vectone mobile is a great option for pay as you go SIMs where you can get EU roaming as well as international calling to other countries for a very cheap price.
How to do Vectone top up?

Lycamobile specifically focuses on selling pay-as-you-go SIM cards to individuals wanting to make international phone calls. It uses the frequencies of O2 on a lease basis to provide its services across 23 countries worldwide.
How to do Lyca mobile top up?

A great option for when you are travelling abroad. You can get multiple local country numbers on the same SIM card while being able to call, text and use data for extremely low prices. This is an ideal choice for someone based out of U.K. who might be travelling across borders.
How to do Toggle mobile top up?

Owned by Telefonica, GiffGaff is another MVNP that offers pay as you go SIM cards. Something unique about them is that they do not have customer service phone lines but instead customers get their answers to issue by posting on an online message board. Other GiffGaff members who are employed by GiffGaff usually answer these questions. If the issue is still resolved then a dedicated complaint takes over and responds in up to 5 days.
How to do Giffgaff top up?

The best part about this list is that you can get a mobile top up for every single one of these providers by simply downloading the Kwikpay app from Google Play Store or the App Store. This app will allow you to top up within a matter of seconds and even stores your preferences so mobile top up experience is smooth every time.[/vc_column_text][/vc_column][/vc_row]